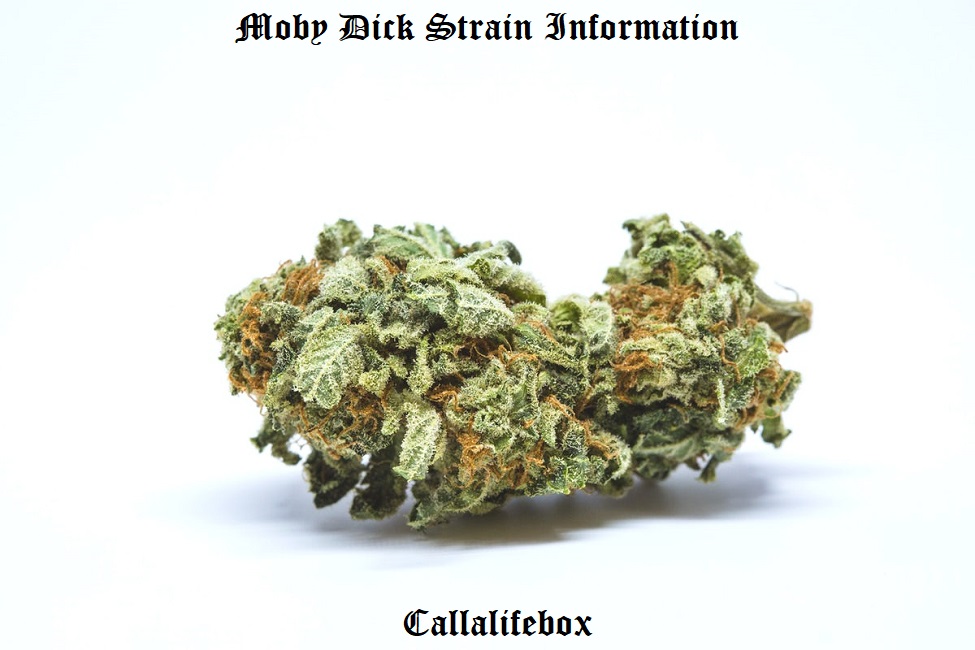 Moby Dick is a potent sativa marijuana strain made by crossing White Widow with Haze. The result is a strain that will make you feel buzzy and energized. The aroma of Moby Dick is a sweet citrus that gives way to vanilla and eucalyptus notes. Growers love this strain because it has a short flowering period, is resistant to mold and provides a high yield. Moby Dick is originally from Amsterdam. This strain is bred by Dinafem Seeds.

Dinafem chose their two best clones of White Widow and Haze and crossed them, likely using the colloidial silver sex-reversal process in order to create male flowers on female plants, thus producing feminized seed stock.  White Widow is known for its power and trichome production, well Haze is renowned for its soaring, cerebral effect — combining the two produces a Sativa-dominant plant which ups the frostiness of the Haze, lessens the flowering time, but still retains much of the Haze flavor and aroma.

For a cannabis strain with such brilliance and so much to share with the world, it seems fitting that it would be named after one of the Earth’s largest mammals, the whale. Moby Dick marijuana strain might immediately make you reminisce back to the days of high school, when the paperback classic by the same name was often a mandatory assignment for most teenagers. But luckily the marijuana version is a whole lot more enjoyable and probably won’t make you fall asleep out of boredom.

Moby Dick is a Sativa-dominant strain. Its name reflects its massive yields, which reportedly can reach 1,500 grams per square meter. The THC concentration of this strain may be as high as 20%.

The effects of this strain are highly psychoactive, due to a high count of tetrahydrocannabivarin (THCV). It produces strong euphoria and gives spacey, happy, and slightly psychedelic sensations after only one or two hits. Some users feel creative and focused. The strong cerebral effects begin to diminish after about an hour, but the residual effects can last another two hours. These effects are coupled with pleasant body numbing sensations. Strong and trippy, this strain induces an insatiable appetite. This mega-strain may result in dry eyes and mouth and lead to paranoia, dizziness, and anxiety when consumed in high doses.

Moby Dick is designed specifically as a strong medical strain. It is excellent for daytime use though patients may feel lazy a few hours after use. The cerebral effects are often used to combat the symptoms of stress, anxiety, and depression. Patients that have lost their appetites, whether it’s due to chemotherapy or other reasons, often choose this strain. The body high may ease mild aches and pains, but it is not strong enough to combat severe pain.

Moby Dick comes from the breeders at Dinafem (dinafem.org) who crossed two of their mother plants, a variety of Haze and a variety of White Widow. The strain has two phenotypes: one with Sativa-dominant characteristics that can reach up to twelve feet outdoors, while the other is a smaller, Indica-dominant phenotype, that is only seen about 35% of the time.

Moby Dick can be grown indoors or outside and is not recommended for amateur growers. Inside, the strain flowers for around ten weeks and requires an electrical conductivity level between 1.5 and 2 as well as 800 watts per square meter. Growers are also cautioned to keep the pH levels below 6.5 as they can affect yield. Outside, this strain needs little care, and under optimal conditions it may produce exceptionally high yields.

Much like its parent Haze, Moby Dick offers pleasant and delightful citrus notes that are genetically predispositioned from its relative. Additionally, hints of vanilla and eucalyptus are present, which is likely from White Widow, the second parent responsible for MD’s making. The overall blending of all these various aromas not only generates a unique and intriguing combination, but it is also one that becomes addictive and highly satisfying.

The flavor of this cannabis strain is much like its smell, with some extra added twists and a slight increase in strength. The presence of sour lemon is that much more noticeable, but gets mellowed down with sweet and creamy vanilla, plus subtle touches of woodsy pine. The inhale and exhale is soft and not overwhelming, so don’t expect to cough a lung out after taking of puff of this dank stuff.

Appearance-wise, the buds are dense and thick, as is classic with a sativa marijuana strain. They are various shades of green ranging from light to dark, with dark orange pistils, (tiny hairs), stretching and twirling in between the sugar leaves. These leaves certainly provide plenty of that sugar too, coated heavily with crystals and trichomes, supplying part of the plant’s sizeable THC content. The density of these crystals mimics the first frost of the year, sparkling and shining when placed under the light for observation.

This marijuana strain is truly not only a joy for the consumer, but also for the cultivator. It is relatively easy to grow, considering that it has a high resistance to molds, mildews, and diseases, and also offers a higher than average yield. It does, however, require a bit more care and maintenance to keep up a healthy flock of crops, but this is typically the scenario for most professionally grown cannabis crops.

The plant is classified as a sativa, so as expected it grows rather tall and will need a suitable room or space to flourish. For this reason, it is maybe clever to cultivate Moby Dick outdoors if the weather conditions permit. Outdoor grown plants require sunny and warm Mediterranean-like conditions, where they can absorb plenty of sunlight and rays.