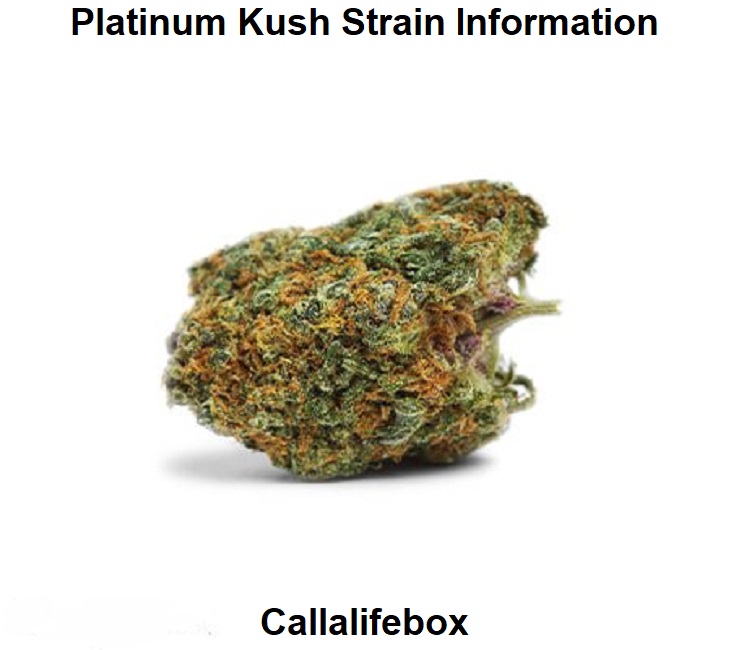 Platinum Kush is an indica marijuana strain made by crossing OG Kush with Afghani. This strain takes on a platinum-silver shade due to its thick coat of crystal resin. With purple hues and bright orange hairs, its buds grow dense with a sweet fruity and hashy aroma. The buzz from Platinum Kush has been described as strongly cerebral and body-numbing.

The cannabis strain Platinum Kush is an indica that derives its name from the platinum/silver sparkle its buds produce when harvest-ready due to the many trichome crystals that form. Underneath these crystals, one can find leaves with hints of violet and bright orange pistils. It has also been called Platinum OG Kush and Platinum OG.

The parent strains of Platinum Kush are the hybrid OG Kush and an unknown landrace Afghani strain.

Platinum Kush normally bares a THC level between 16-18%. Its high is known to be felt immediately after consumption, numbing the body into a mellow relaxation. It can increase cerebral activity as well, with some reviewers stating their creativity is heightened. Many use this strain to help with sleep, with some describing Platinum Kush’s high as perfect for sinking into a pillow.

Not many ill side-effects have been reported by reviewers besides the normal ones of dry eyes and mouth. Some have mentioned slight phases of paranoia that quickly wind down.

Growers must be aware that the THC content of Platinum Kush drops quite low when grown in poor conditions.

Platinum Kush is a resinous strain worthy of its lofty title. This popular indica-dominant hybrid is derived from rock-solid OG Kush genetics and carries its parent strain’s memorable aroma. This is also a bud with serious bag appeal, often showing off vivid purple leaves. Platinum Kush offers consumers a pleasant balance of cerebral acuity and thorough relaxation. Cannabis testing lab Analytical 360 has measured its THC content at between 13% and 17%.

Platinum Kush sets itself apart with medium to large-sized nuggets that cling together in conical formations. These spade-like flowers have the densely-packed structure often associated with other indica-dominant varieties, with their leaves overlapping each other as they curl tightly inward toward their central stems. The leaves themselves are a pale sea green; some phenotypes of the strain also have patches of pale and dark purple in their leaves — such surprising colors come about when anthocyanin pigments in the plants’ genetics are stimulated by colder than average weather in the growing process. Finally, a blanket of silvery white trichomes covers the inner and outer surfaces of these dense flowers, giving them the platinum sheen referenced in their name.

When properly cured, Platinum Kush can smell intensely sweet, verging on skunky, with a fermented edge. There is also an earthy, musky underpinning, keeping the aroma organic and grounded. When these thick flowers are ground up or broken open, they give off a tangy odor, reminiscent of mature cheese. When burnt in a pipe or a joint, these strong scents come together in a thick, harsh smoke that’s liable to induce coughing or watery eyes. Platinum Kush’s smoke tastes both sweet and acrid on the exhale.

Platinum Kush offers a slow, creeping high and may take as many as 15 minutes after users have finished coughing on its smoke before revealing its force. Effects eventually emerge as a throbbing around the eyes and forehead. This sensation soon trickles down the neck and spreads through the core and limbs, making users feel weighed down. In addition to a sudden pervasive relaxation, users typically report a change in sensory perception. Visual and auditory amplification can be expected, as can some trippy phenomena like distorted depth perception or a strong sense of time dilation. As they acclimate to the force of this strain’s sedative and psychedelic power, smokers of Platinum Kush may also notice that their thoughts take on a newly elevated quality. Ideas may jump around in free association; occasionally, a single concept may assert itself to occupy more of the user’s attention than it otherwise might. Such head-focused effects make Platinum Kush a great bud to enjoy before tackling complex, analytical tasks, as well as more open-ended creative pursuits. However, due to its heavy and intractable body stone, this strain may prevent users from engaging in physical activity, whether it’s exercise or simply getting up and cleaning the house. Platinum Kush can be a great way to unwind after a long day, whether you’re alone or surrounded by like-minded friends. Its holistic high can help the smoker feel centered and refreshed. Because of its progression toward sleepiness, this strain is best consumed in the evening or nighttime.

Platinum Kush’s versatile effects can also have several applications for medical cannabis patients. It numbing effect may temporarily soothe the symptoms of mild to moderate stress and depression. In some cases, it can also help those with attention deficit disorder to sustain focus on any tasks at hand. On the physical side, Platinum Kush can soothe aches and pains, from the chronic and disease-related to more minor inflammatory annoyances. Even though this strain can be head-focused, it doesn’t often lead to recursive, paranoid thinking, making it good for those who are prone to panic or who have a low THC tolerance.

Since no commercial growers appear to have fostered Platinum Kush for large-scale seed production, prospective home growers should obtain clippings of the strain in order to grow identical “clones.” Although there is little information available regarding specific best practices for this strain, we know that it can be grown indoors or outdoors in a humid, Mediterranean-like climate. Additionally, this bud’s indica background suggests both short, squat plants and a relatively brief flowering time.

Platinum Kush is a must-try for indica lovers — especially fans of potent OG genetics. Its versatile, multi-faceted high can either perk up the mind or slow down the body, depending on the user’s individual need.

The sedating high from this indica is perfect for a night of anxiety-free relaxation. Platinum Kush gets its name from its frosty appearance, a result of the dense trichomes that grow on the bud. THC levels vary, but are usually in the 16%-18% range. That makes this a moderately strong choice, though poor growing can lead to very low THC levels. An indica, Platinum Kush has more CBD than most strains available in America. This chemical is used to treat severe seizures and other conditions. The combination of THC and CBD makes this a good strain for anxiety, depression, and pain, as the body high is deeply relaxing. This strain has a sweet, pungent smell reminiscent of fruit and a sweet, earthy taste. Platinum Kush, aka Platinum OG Kush and Platinum OG, is probably the result of crossbreeding between Master Kush and an original Afghani strain. Platinum Kush produces a mellow, easy feeling; the high doesn’t last very long, but it’s usually enough to put an insomniac to sleep. Dry mouth and red eyes are the only likely adverse effects, though paranoia is also possible. Platinum Kush is most popular in Denver and the West Coast, but it’s harder to find in other parts of the country. 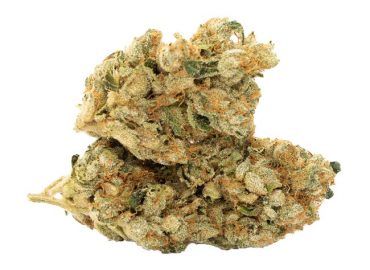 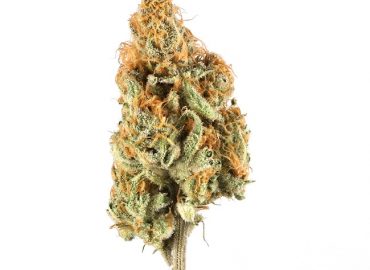 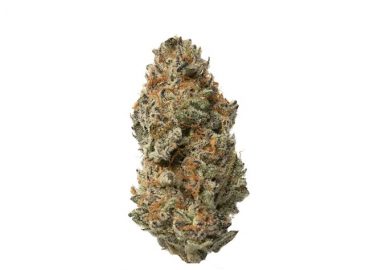